The story of Todd Raymond’s collaboration with Workshop/APD really began in 2018, when the interior designer applied for a job with the New York-based architecture and interiors firm. solidify. One of the directors, Matt Berman, laughs when he recalls the interview. “We met Todd and loved his energy, creativity and passion,” Berman says. “But then he turned us down!”

Raymond eventually established his own studio and became a go-to designer focused on modern residential interiors. “It was a nice surprise,” Berman said, when he got a call from Raymond a year later asking him to team up to renovate his own loft in Manhattan’s SoHo neighborhood.

A Paolo Ferrari chaise longue in Pierre Frey bouclé in the TV room. Console from the 1960s by Guillerme and Chambron; coffee table by Opinion Ciatti; chairs by Massproductions; artwork by Michael Angel.

The designer and her lawyer husband had bought the loft in a Beaux-Arts building for its large wall of windows and intricate wrought iron facade. “We were looking at all of these downtown spaces, but most of them were long and narrow,” says Raymond. The one they chose is more square than rectangular, with an open floor plan that required some creative thinking. “The challenge is that you only have windows on one side,” says Berman. “To accommodate this layout, we had to move the main entrance about 20 feet down the hall, so you enter towards the back of the box.” 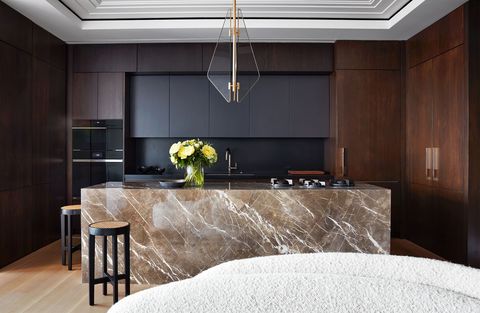 A Joris Poggioli pendant hangs above a custom Grigio Collemendina marble island in the kitchen. Stools by France & Son.

The living areas were organized around these windows, while the utility rooms were placed behind. “We wanted the apartment to be an entertainment space,” says Raymond. “It was non-negotiable. We never really had a place where we could do that. Now we have dinner parties or cocktail parties every other week.” 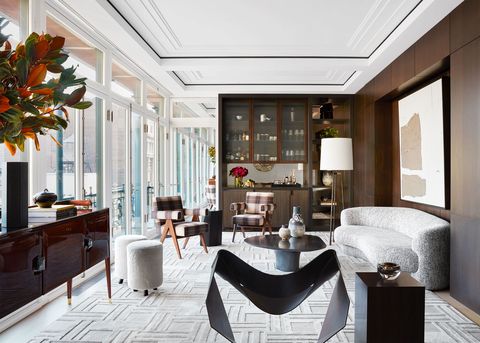 The apartment was designed to change shape depending on whether the company is over or it’s just about Raymond and her husband: the kitchen island turns into a bar, while the kitchen – sink, coffee maker, refrigerator – can be neatly hidden behind folding doors. The range is all that is visible when these doors are closed, and even that can be hidden under an oak enclosure. 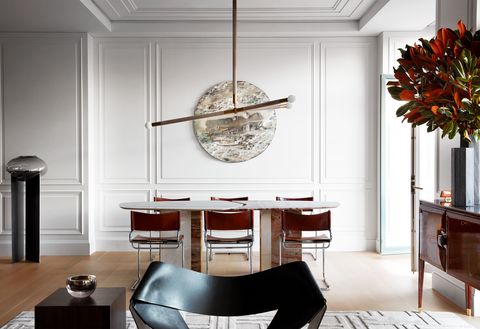 In the dining room, the marble and brass table comes from LA Studio Interiorismo in Madrid. Vintage leather chairs by Luigi Saccardo; – chandelier by Apparatus Studio; work of Damien Gernay.

Opposite the kitchen is the TV room (used rarely and only in the evening) which leads to the dining room and then to the living room. The apartment is designed as a series of architectural secrets, with Berman and his team implementing arrow doors, panels and storage to make the most of the limited space and light. When closed, the kitchen doors reveal a Max Boyd painting of a traditional Australian bungalow – wraparound porch, pitched roof and all – which reminds Raymond’s Aussie husband of his Down Under roots. Personal touches appear throughout – in the bathroom, a Slim Aarons photograph of a boat nods to the couple’s wedding six years ago on Lake Como. 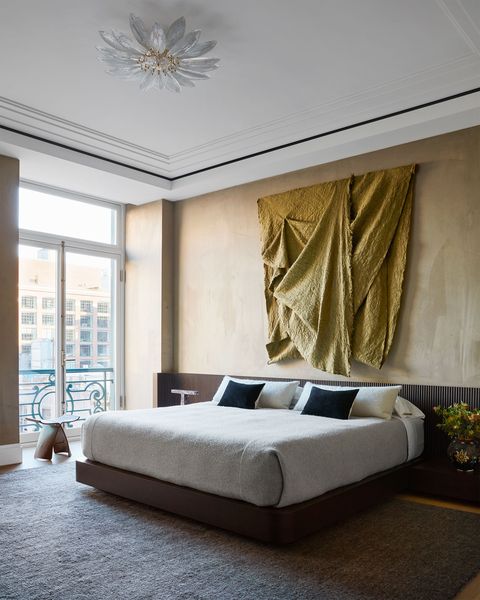 Raymond pinned a handwoven and dyed linen textile by Pauline Esparon to the custom bed. Wallcovering by Phillip Jeffries.

But what came first in the design scheme was color and texture. Raymond’s work often leans towards the neutral, but for this home he pushed the palette in a more dramatic direction with hues such as moss and cinnamon. Berman was receptive. “Our work tended to be lighter,” he says, “so we liked this project to be darker, deeper, and richer.” In the dining room, for example, the two-piece table is topped with volcanic red and earthy brown marbles. A 1950s sideboard by Vittorio Dassi bridges the dining room and living room. In the latter, the checkered alpaca wool of a pair of vintage Pierre Jeanneret-style armchairs is echoed in the cut-out wool and silk rug.

The master bedroom is cleverly deceptive: its door is mirrored on one side so that when closed it almost disappears. The effect draws attention to the living room and creates a clear distinction between public and private space. The bedroom’s custom headboard offers lighting, storage and charging stations, all hidden behind fluted oak panels. “My husband and I are very particular in the way we live,” says Raymond. “Everything has its place, and everything has to make sense.” Even Chester, the couple’s Norfolk terrier, has his own closet, with neatly organized dog toys and accessories. 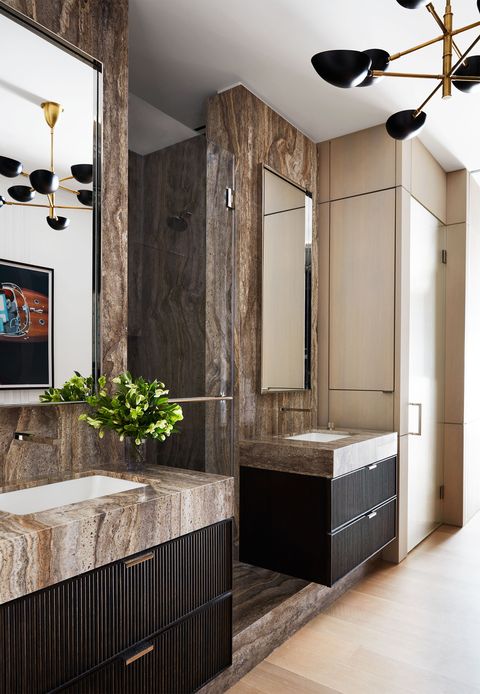 The master bathroom custom vanity is in gray travertine. Chandelier, Circa Lighting.

Due to the open and winding layout of the apartment, Workshop/APD had to design unique ways to define each space architecturally. “We used the geometry of the ceiling to create a sense of rooms, viewing it as a fourth plane,” says Berman. The stepped design cleverly frames each space, while concealing apartment wiring and mechanics and stylistically nodding to the past. “The building is from the early 20th century, so it made sense to honor that style and language,” Berman says.

In this way, the house unfolds, offering a new surprise at every corner. A full rotation around the apartment takes five right turns, from the entrance through the kitchen and TV room to the dining room, living room and finally the master suite, like a Rubik’s cube disguised as a sheep . 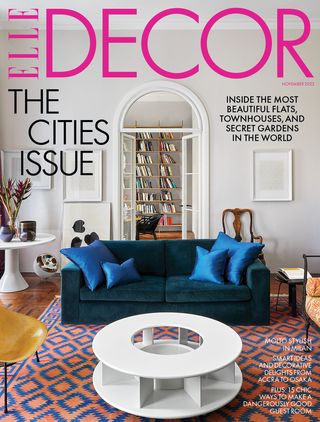 This story originally appeared in the November 2022 issue of ELLE DECOR. SUBSCRIBE