Designer Xie Jingchen, 25, last month completed a replica of a Ming Dynasty (1368-1644) fengguan, or phoenix crown, which is a traditional type of Chinese headgear for noble women and women. brides.

Xie also uploads videos to the Bilibili platform showing how to make replicas of ancient jewelry ornaments with the skill of intangible cultural heritage, Chongqing style filigree inlays, how to dress with the ornaments and create the ancient hairstyle. as well as knowledge of traditional culture and ceremonies.

Raised in a family committed to traditional culture, Xie said he developed his interest in traditional Chinese crafts as a child. After graduating from college, he began to engage in filigree marquetry. 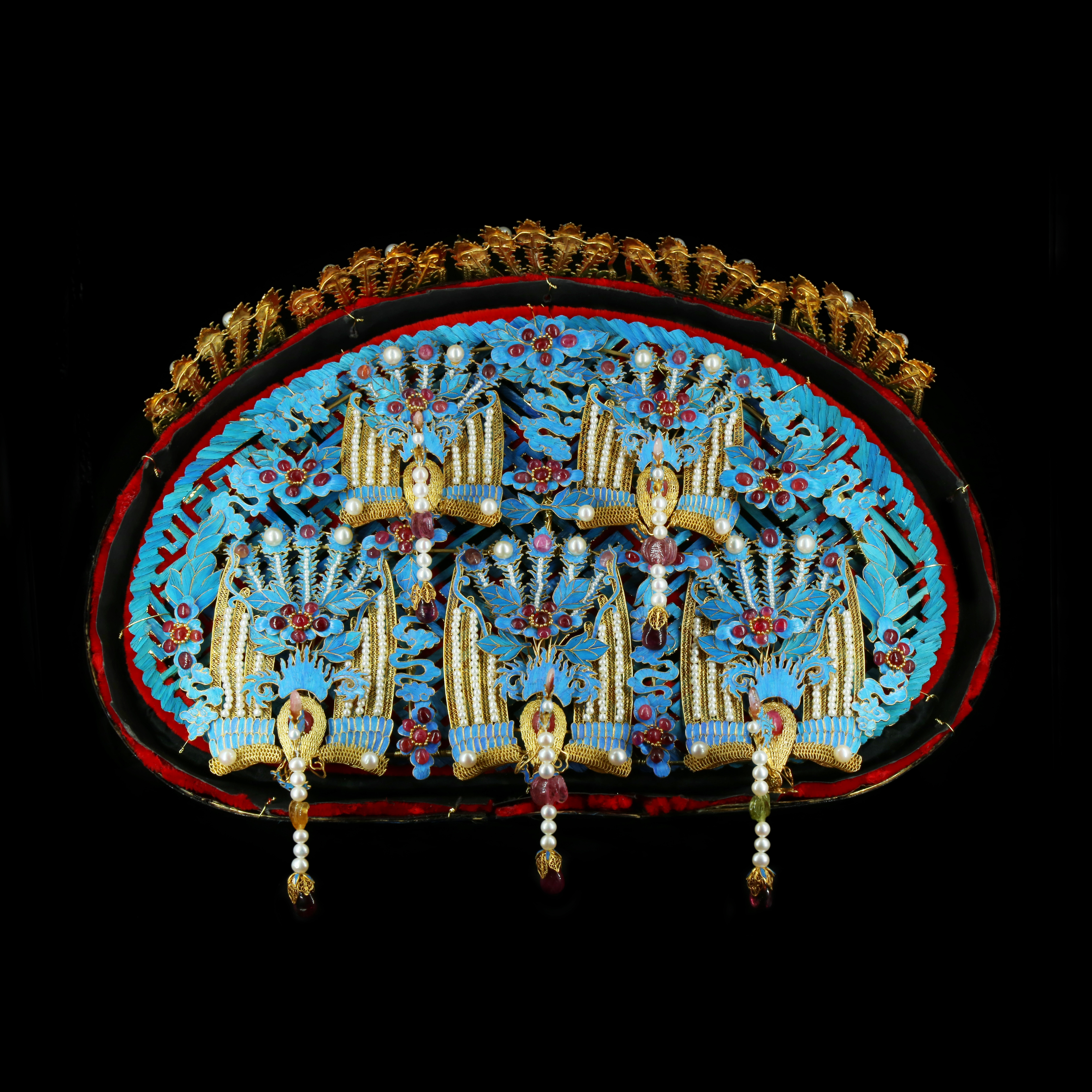 “Filigree inlay has a long history and during the Spring and Fall (770-476 BC) and Warring States (475-221 BC) periods there was a skill called jinyincuo, which is the prototype of the filigree inlay, ”explained Xie. “In the Ming and Qing dynasties (1644-1911), it achieved its greatest prosperity with jewelry mainly made with it. The best pieces were exclusively intended for noble families. “

There are different kinds of filigree inlays, Xie said. Chongqing style filigree inlay is more elaborate and mainly used for jewelry, while Beijing style is also applied to making larger things such as bottles and ornaments.

Headdress of the Nine Phoenix and Peony 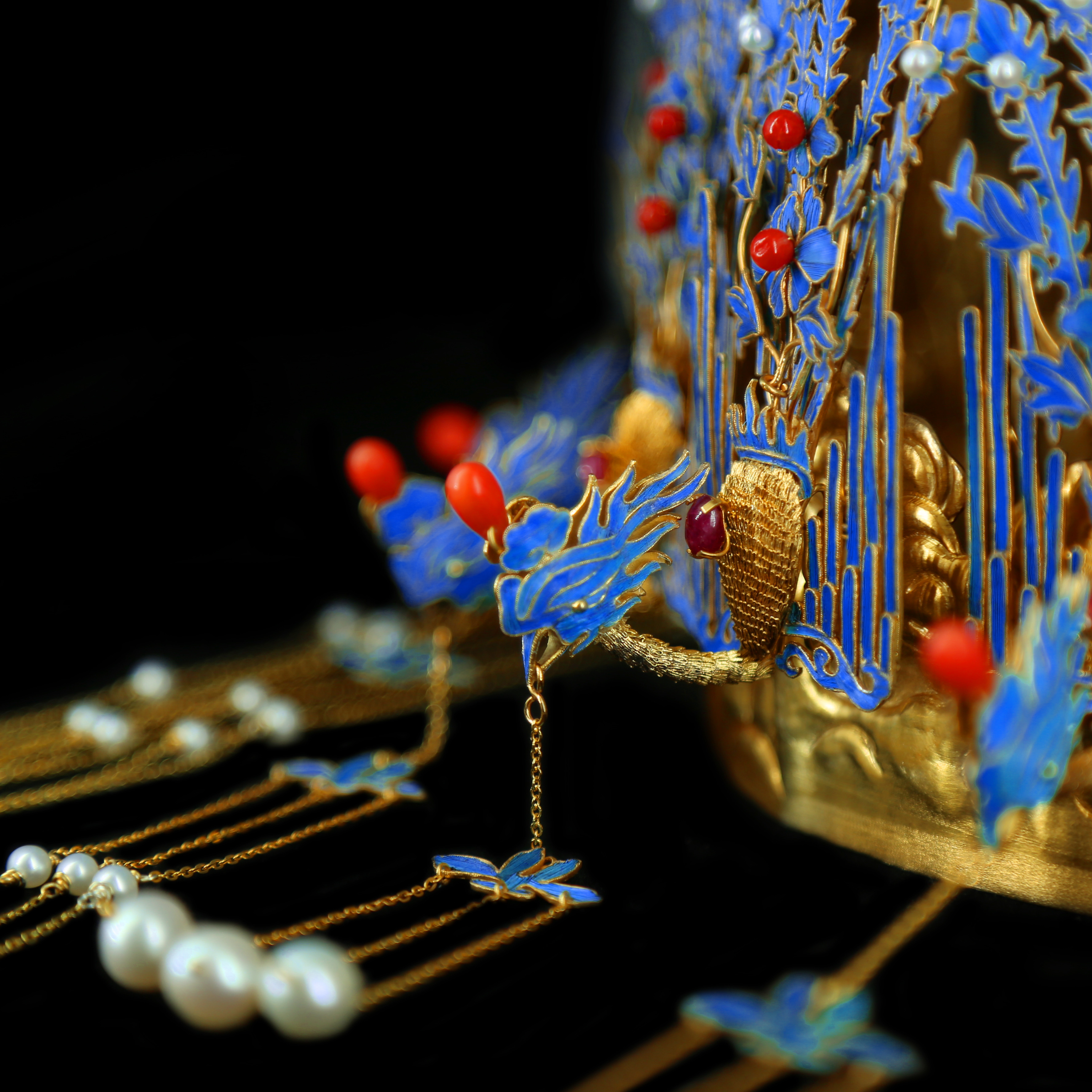 Headdress of the Nine Phoenix and Peony

Xie is a partner of Qiaose Intangible Cultural Heritage Jewelry Workshop in Suzhou, which offers two kinds of products, one is the replica of cultural relics and the other is modern jewelry with filigree inlay and diancui technique, which applies bird feathers on accessories.

Although he majored in science and engineering, Xie said he learned painting when he was little and loved design. While in college, he opened a Weibo account and published articles such as Appreciation of Cultural Relics and Antiquities and the Evolution of Dress in the Ming and Qing Dynasties.

Headdress of seven phoenixes and two dragons playing with a pearl 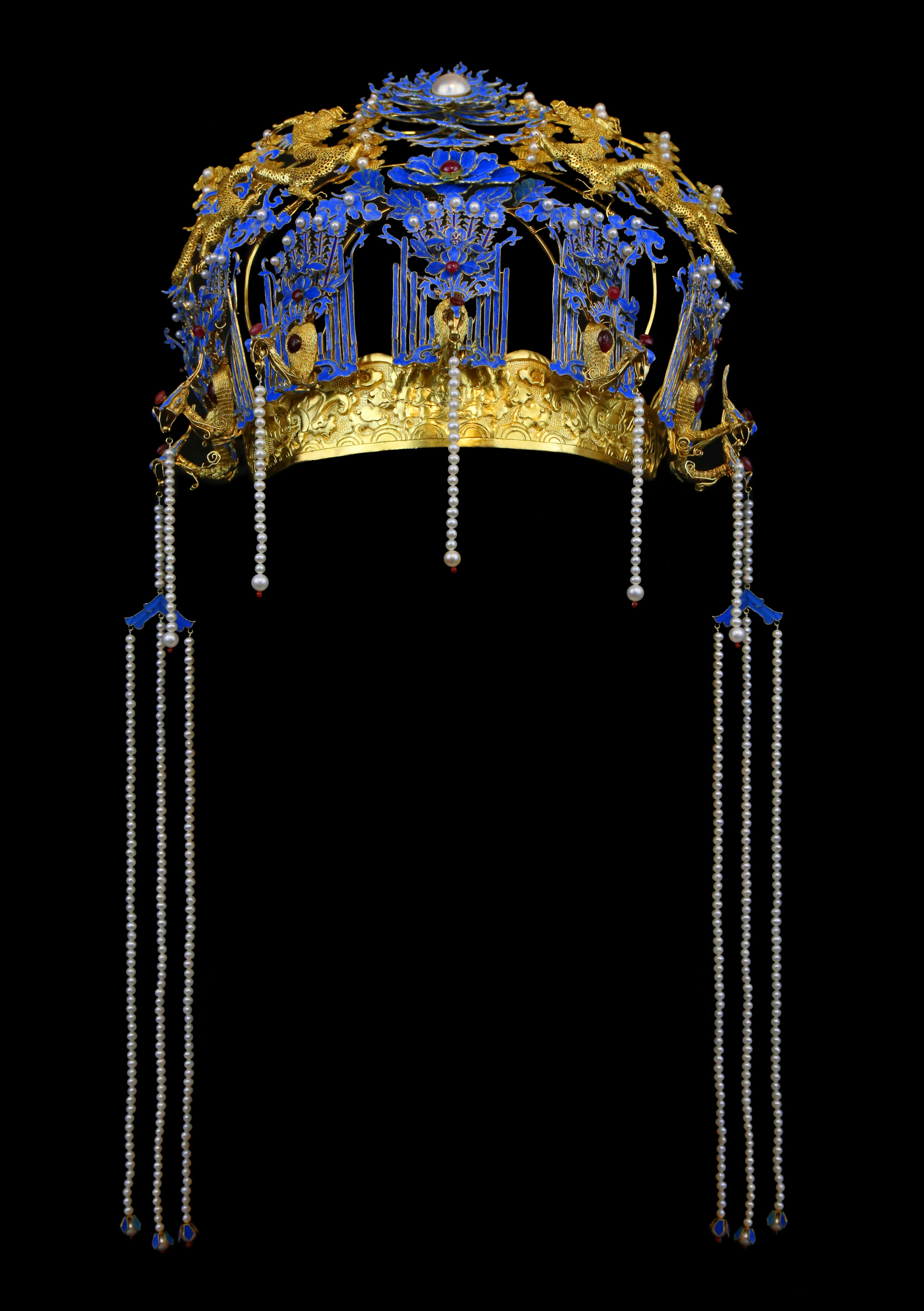 Headdress of seven phoenixes and two dragons playing with a pearl

“It also has something to do with my hobby and the business of the workshop,” he said.

“Since the workshop mainly made court jewelry from the Ming and Qing dynasties, many fans were curious about how noble women wore the jewelry and how they dressed. aspect of traditional culture so that they are not misled by certain television series. “

But when they brought the traditional look to an audience, they faced a lot of challenges.

“For example, we want to ‘restore’ the look with the clothes and makeup of the Qing dynasty,” he said. “We can do the jewelry but it’s difficult to have the clothes. To show the public better, we always use the old clothes so I have to spend a year preparing for it.” 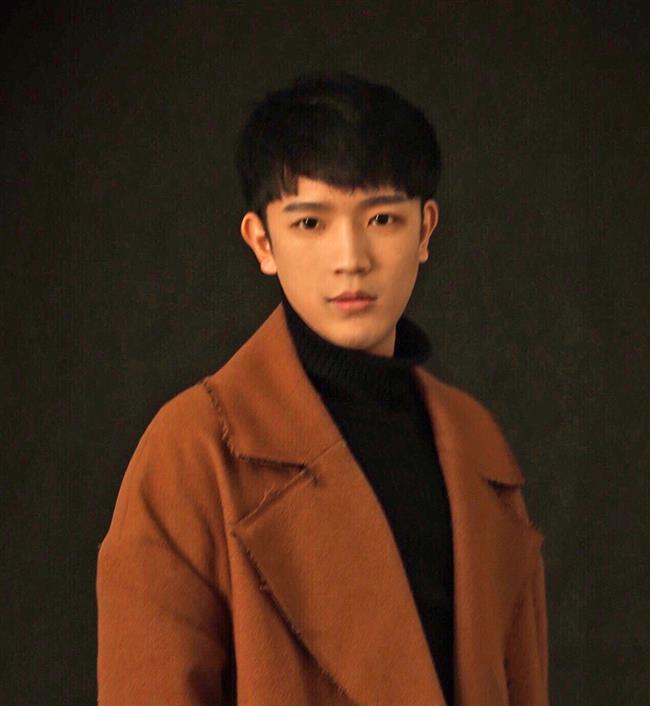 In the past, an outfit from the early Qing Dynasty wore a golden phoenix ornament, Xie said. Although they could make a similar one, some details would be different from the original because the technique they use is different. He later found an old one and spent a lot of money to restore it, which can both be used on the outfit and taken as a benchmark for making replicas.

“For a complex piece, it can take a year or two to do the preparation, draw sketches, start making it and understand its technique. The time it takes depends mainly on the technique and design of the piece of jewelry.”

In addition to recording how they made the adornments and restored the clothing, he also filmed videos of how a former queen spent her solar quarter day. dongzhi, or winter solstice, in the imperial harem.

“It provides a comprehensive knowledge of ancient culture, much more than dress and jewelry,” he said. “It shows interior decorations, etiquette, and special scenes like reverence for Buddha.” 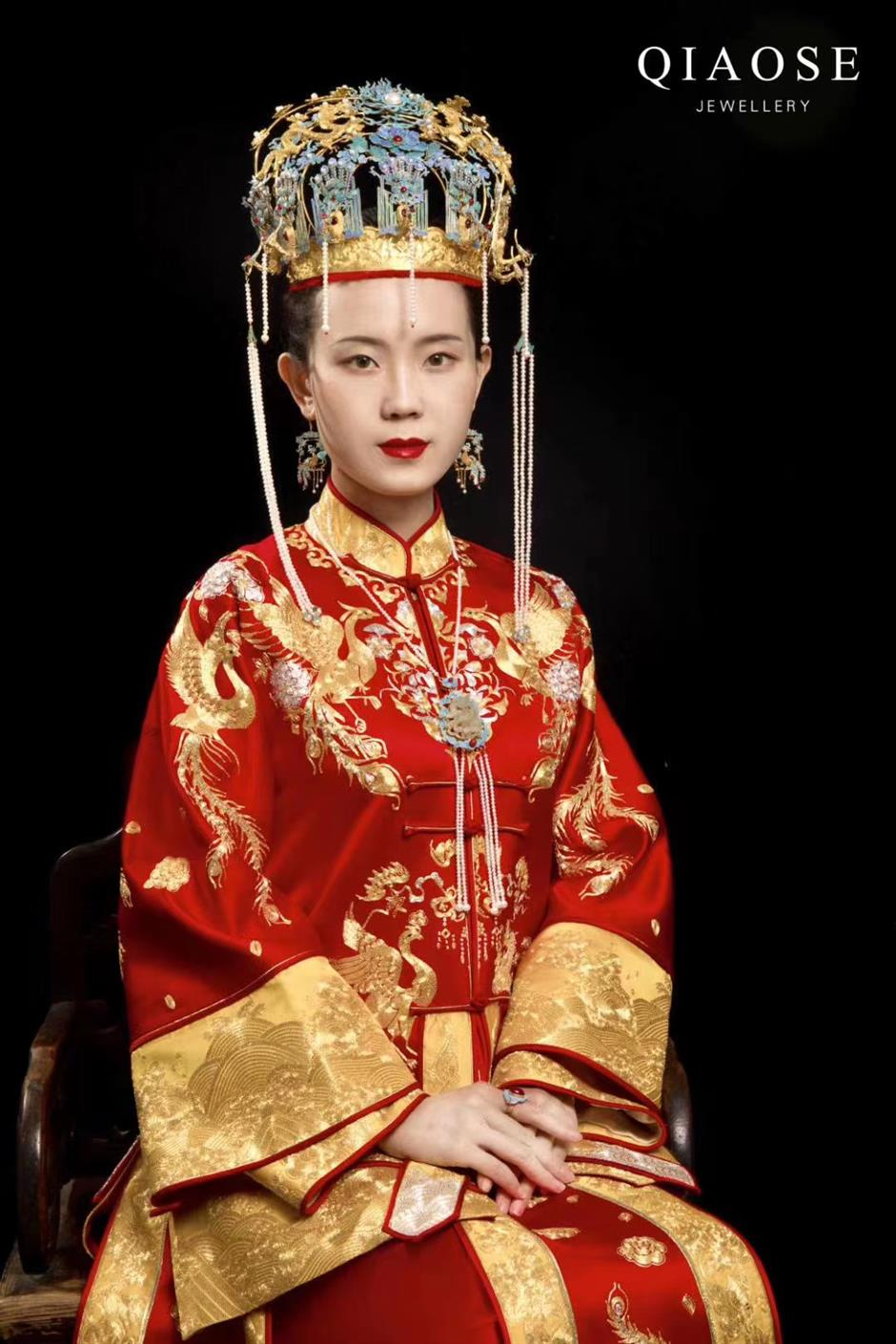 A traditional Chinese bride’s outfit made by Qiaose.

They also invited a lama, referring to Buddhist monks in Tibet, to join the filming.

Sometimes videos can have unexpected comments.

Xie once posted a video that featured an antique silver hair clasp in the Chaoshan region of Guangdong. One of her fans contacted her and said she had one in her late grandmother’s house, but it was damaged.

In her hometown, there is a custom that the bride wears a head covering with local characteristics. She wanted to find an old one that was almost the same, but noticed that most of the similar hair clips on the market are combined with modern styles. 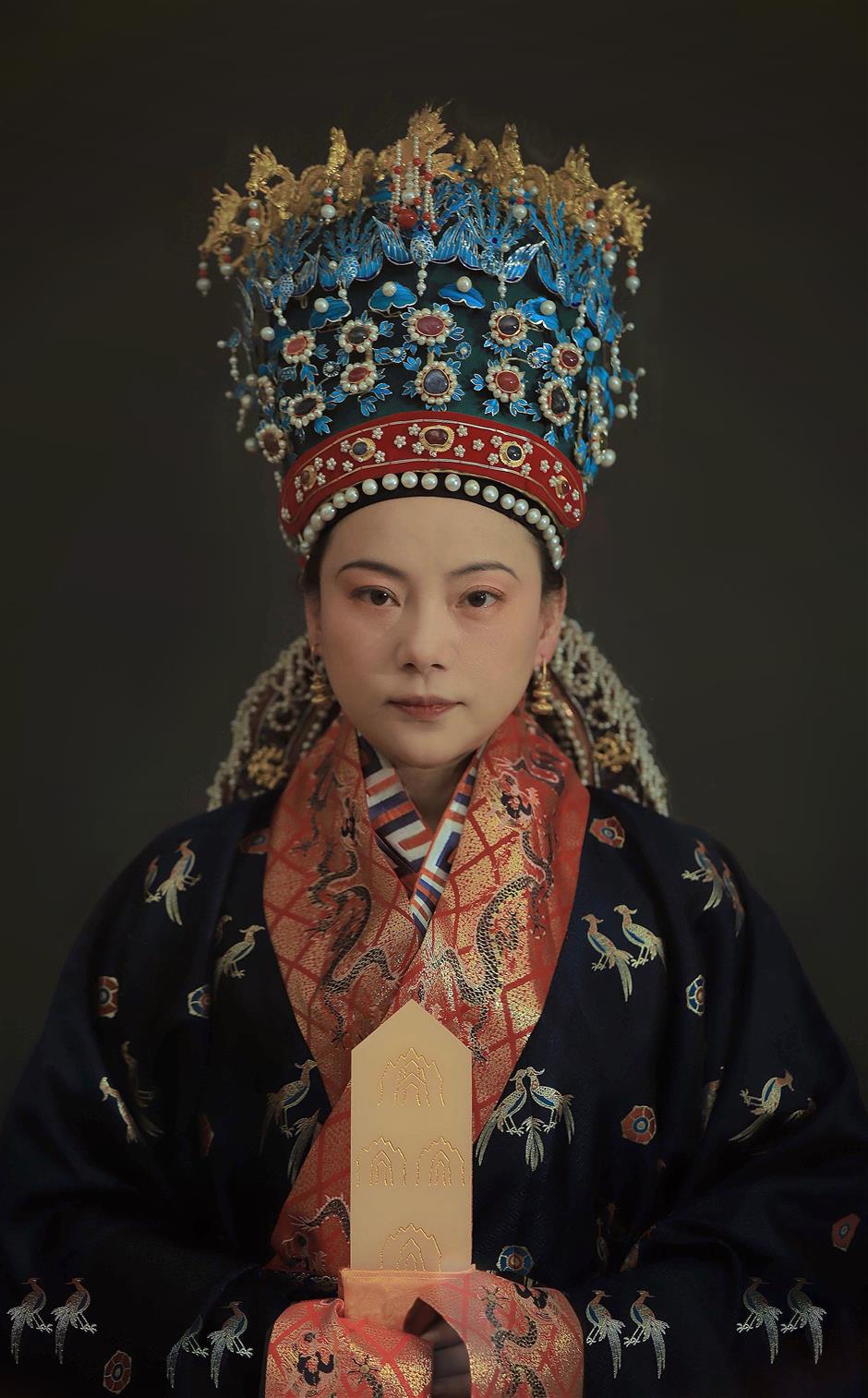 Headwear and outfits are in tune with the times.

She asked if she could buy the one in the video, and Xie agreed. Then she wore the hair clip to her wedding and felt her grandmother was with her.

“Many customers buy fengguan of our workshop for their Chinese wedding ceremonies, ”he said.

“Then it will be well preserved and passed on later to their daughter or daughter-in-law when they get married.” Such a heritage is part of traditional Chinese culture. fengguan is not just a headgear, but something that brings mother’s blessing to the younger generation. I think it’s very meaningful. “

Chinoiserie has now become a new lifestyle for young people, and the growing popularity of short videos has promoted it more creatively. 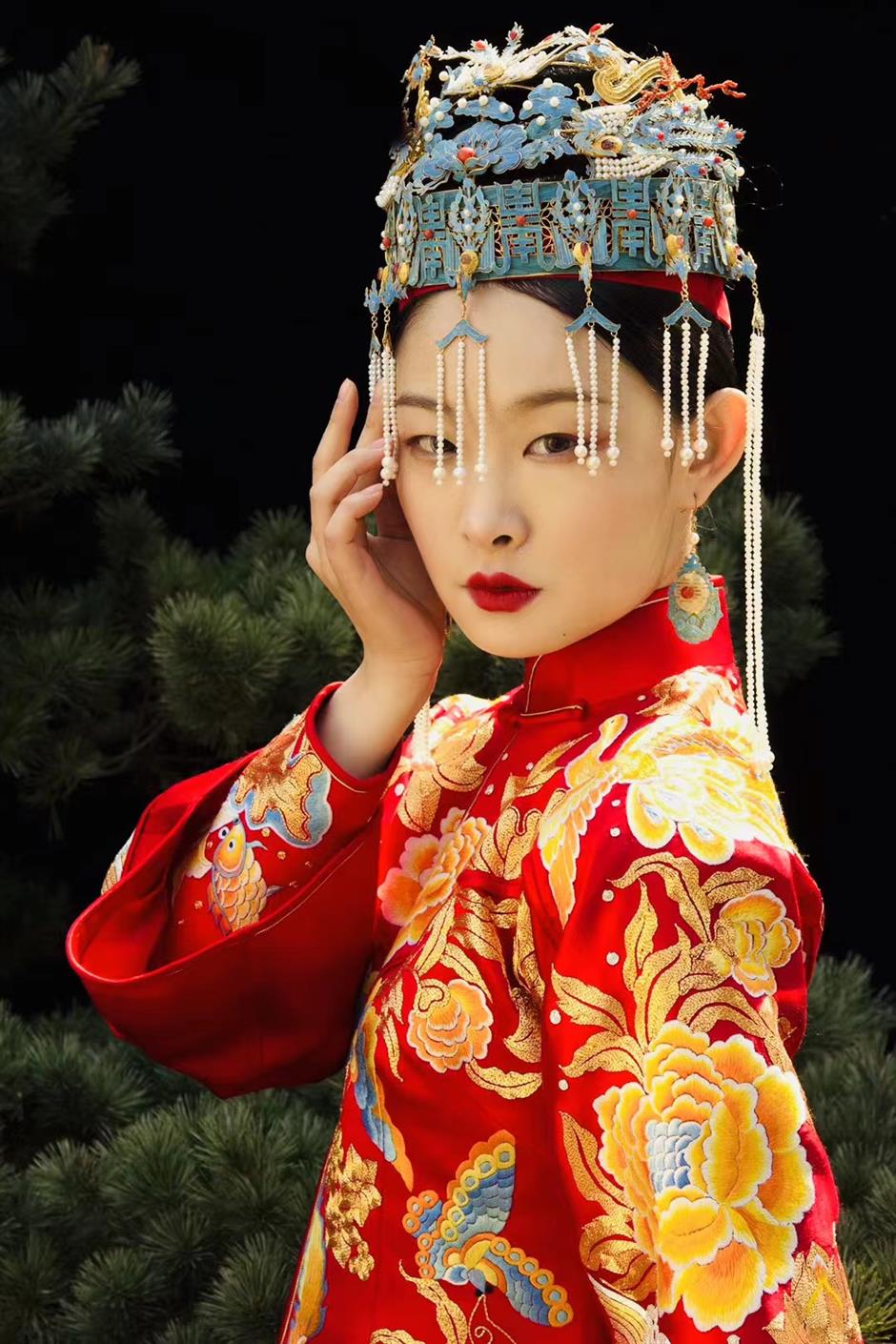 Another downloader, Caiqian, has impressed thousands of internet users by using gold to reproduce iconic cultural relics found in the ruins of Sanxingdui in Sichuan Province. His video showcasing the process of making a goldenrod, which takes four months of work, has been viewed more than 8 million times on the leading online video platform.

The creations of uploader Yanhong Aimee, who makes traditional ornaments with unexpected materials such as trash cans, dead branches, peacock feathers and gold thread, were worn by models at Milan Fashion Week. .

“Sugar King” Zhou Yi makes fondant cakes with Chinese style elements and brings them to the world stage, which has won him many awards. Characters on her cakes include a mythological goddess, a nine-tailed banshee-like fox, moon goddess Chang’e, and ancient heroines like Hua Mulan and poet Tang Wan. 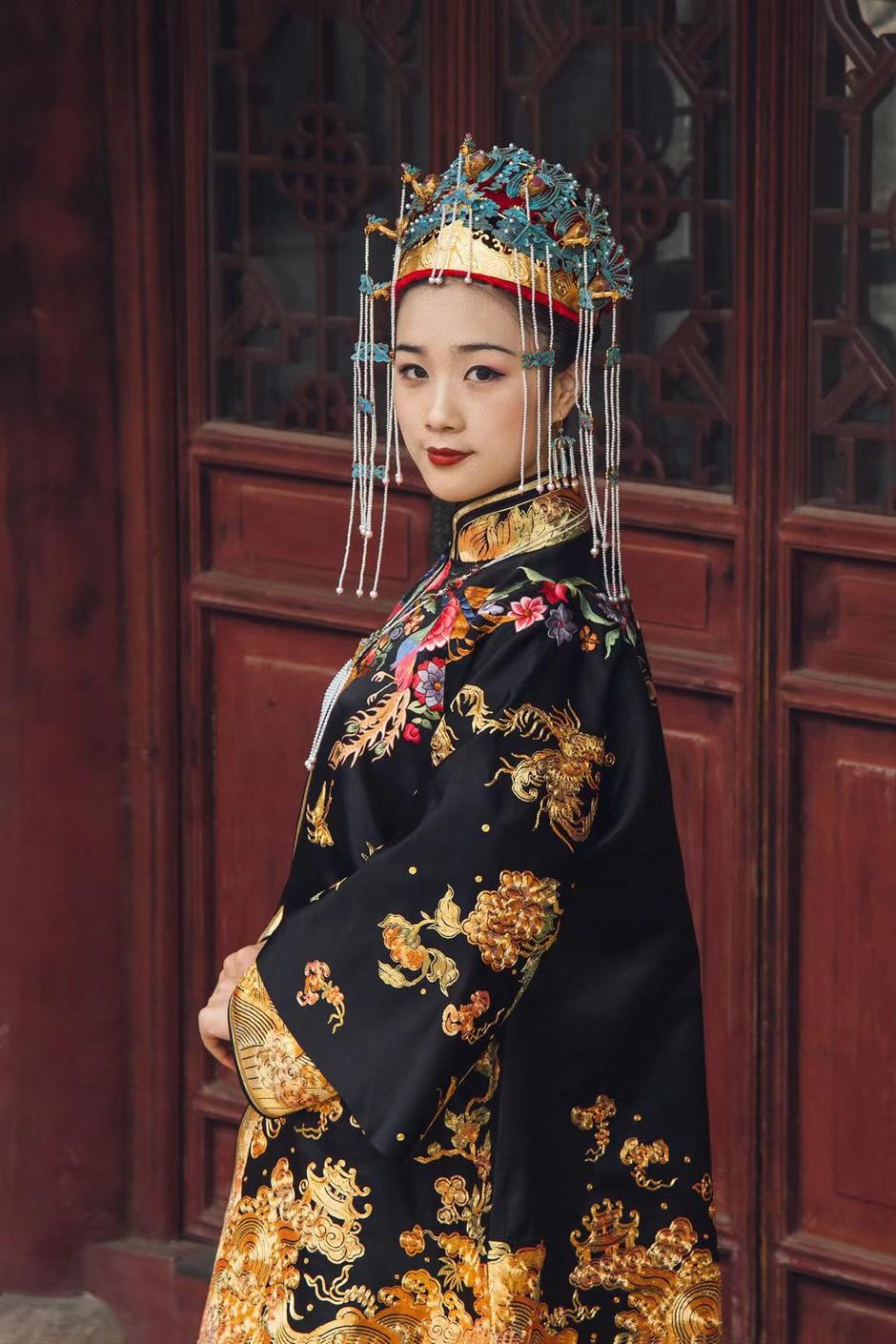 Data shows that at the end of October, there were more than 2 million Chinese Chinese videos on Bilibili and the viewership reached 136 million last year.

“It’s a good trend,” Xie said. “The popularization of the Internet and the greater emphasis on traditional Chinese culture, as well as the love of young people for it, is really helpful for industries like ours, which make traditional crafts.

To cater to the tastes of young people, his workshop also combines traditional techniques with modern designs on works like earrings and brooches. These works go well with modern clothing and people can also have the workshop to personalize theirs.

Xie and the workshop plan to draw sketches of different types of fengguan from the Ming dynasties to Song and bring them to the real world.

“Then there will be an exhibition of Chinese fengguan,” he said. 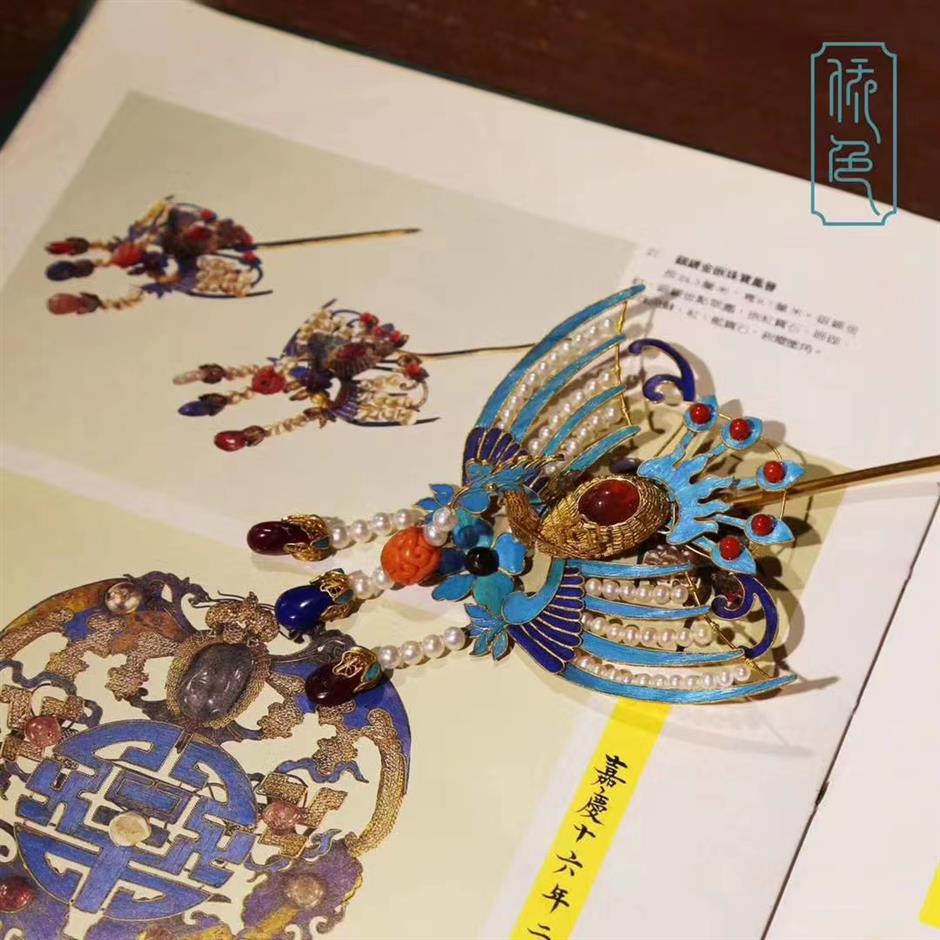 A hairpin made with diancui and filigree inlay techniques. 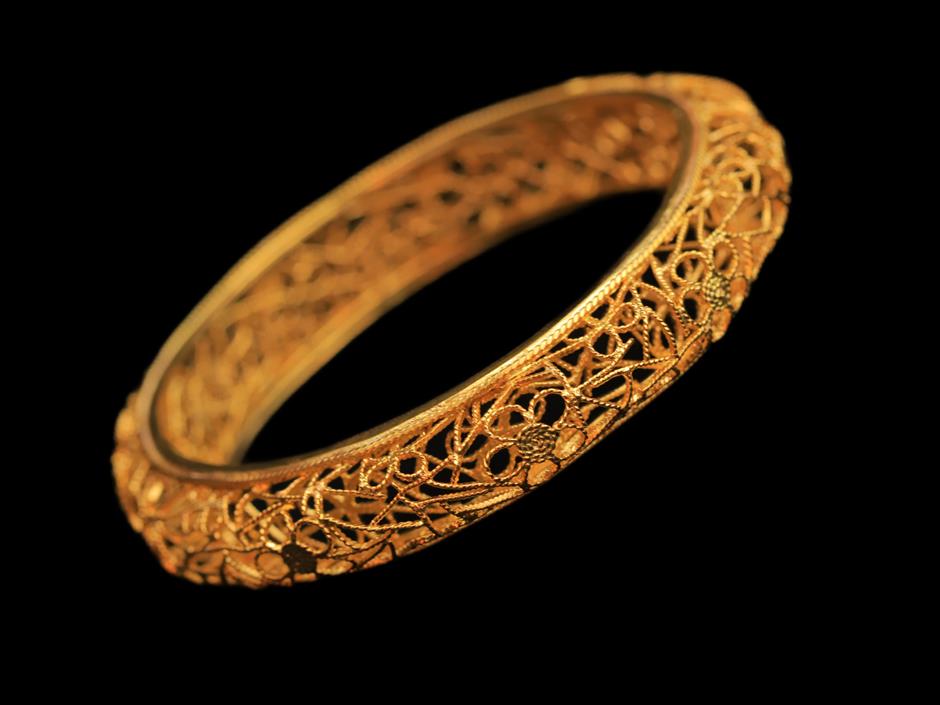 A bracelet made with the filigree inlay technique. 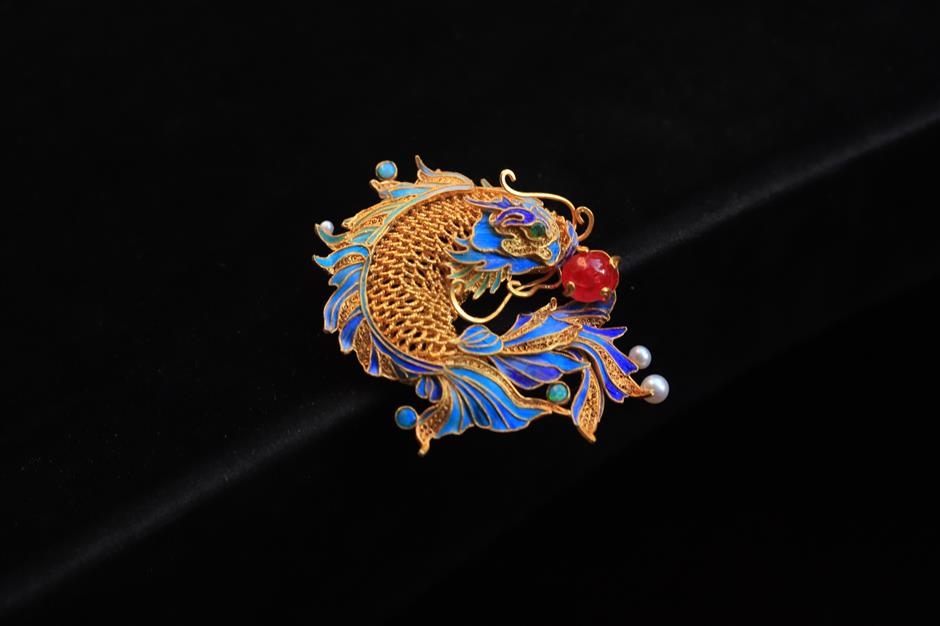 A brooch made with diancui and filigree inlay techniques.

9 hours ago Charline A. Gilson

21 hours ago Charline A. Gilson